Painting could be the new rock and roll. Or not. It’s Turner Prize time again and this time there’s a painter. Ooh yes – a painter; a real one too. Not an ounce of irony squirted about a post-modern canvas to be seen. I’m not expecting this critical largesse to expand and soak up all us saddos that have been rattling around in curatorial oblivion like an emergency rescue sponge. It is quite funny watching the broadsheet critical back peddling though; whether it will extend to a wholesale reassessment of the many excesses of second rate conceptualists or installationists or whatever they call themselves we’ll just have to wait and see. I can’t say that it would be wise to hold your breath – there’s far too much moolah tied up in too many ‘important’ collections (private and public).
There was an odd personal aside that occurred when reading Adrian Searle in the Guardian today. ‘Gillian Carnegie is a surprising choice… Finding your own voice as a painter can take a long time.’
Critics seem to be able to find their voice soon enough, and change it with the wind. I haven’t got a clue what my painter’s voice is… perhaps that’s the problem. There’s too much competing shouting going on in my head whenever I pick up the brush.
Anyway, following Searle’s comment, are we to assume that finding your voice as a conceptualist/installationist (whatever) is therefore easier? BURN THE HERETIC. Carry on like that and he’ll be drummed out of the cosy club.
I was at a show the other day that was almost stuffed to the top of the skirting board with conceptual depth and a fellow punter (a stranger to me) was contemplating a strange assemblage of corrugated cardboard, wire, plaster and other mystery accretions. He smiled knowingly, I think he may even have nodded slightly, looked at me and said ‘Fantastic isn’t it’.
It wasn’t a question; it was a statement. I took the opportunity handed to me and asked what he meant. Was it literally ‘fantastic’ or did it just impress him some way?
It impressed him.
I asked him why; was he impressed as an aesthetic response to the work or at some mystically revealed message imparted across the stripped oak that made him ‘reassess his relationship with the incongruities of a public gallery environment celebrating the creative personal detritus of the artist’ – as the work was apparently meant to do.
He started to load that old expression of ‘hedgehog discovering motorway’ so I calmed his concerns that he was being harangued by a nutter and explained that I considered myself a practicing artist and was just interested in his response to ‘challenging’ work.
‘Well – I just like it’. I thanked him and moved on before he reported me to THE AUTHORITIES…
That’s okay then – he just liked it. Fantastic. Can’t argue with that can you?
There are a hundred and one critics only too eager to jump into the fray to take down the country’s (apparently) most popular painter Jack Vettriano on the grounds that his paint technique isn’t that hot. The same people aren’t generally quite as vitriolic when it comes to assassinating second rate conceptual work. I presume this is either because they don’t know enough cod philosophy to challenge the artistic or curatorial ‘insights’, or they ‘can’t tell shit from pudding’ as an old boy I once knew used to say.
Perhaps the game’s up at last, the tide does seem to be turning a little. Good job too. It’s not only a good thing that you can you have too much of. 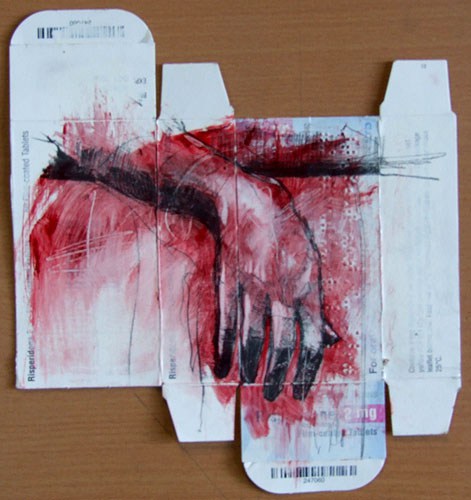