I’ve just received a couple of interesting emails. One that you’ll have to take on trust as being genuine, bearing out the old adage that you’re only six people away from anybody else in the world. A friend of a friend knows an extremely famous artist in this country who is quite happy to admit (when drunk and to friends at least) that there is no real great degree of effort involved in being successful in the current contemporary British art scene. Apparently opportunities come their way like ‘flies to a turd’ (not my words). This person can amble around at a leisurely pace, pursuing whatever interests they wish to progress, and ‘exploring’ new media without fear of lack of financial support as their name alone assures a positive response to funding applications made on their behalf. It wasn’t this that really wound me up. Nope. What did it for me was the admission that if they needed money, all they had to do was ‘scribble some crap’ on a piece of paper as there were currently no shortage of potential buyers willing to invest in the brand.
On the following day I get an email from a 22 year old from Minneapolis who’s greatly enamoured with my work (it was nice in an email but the praise would have embarrassed me if I met them in public). As well as letting me know that it’s as ridiculously expensive to study in America as it is in this country, and that the same financial supported and driven student art cliques exist there as well as here he included this little throw away…
“There are so many people here obsessed with the idea of being an artist that they never learn to be a painter first. So they have art parties and play in art bands and live in art spaces. But they don’t actually do anything.”
This little observation reminded me of an incident years ago when I was ambling round London on a week day (for a job interview). Purely by accident I strolled down a side street off of a main road and went past a building entrance stuffed with beautifully, languidly draped, smoke enrobed fashion victims. I can’t remember the precise uniform details of the requisite sartorial fascism at that time – but rest assured they were all sporting it. They were too busy sprawling beautifully over the pavement to trouble themselves with getting out of the way of the irksome pedestrians so I informed them that they were all, to an individual, a consummate band of masturbators (or some such observation).
As they had now gained my undeserving attention I also took note of which establishment’s maw had vomited them onto the thoroughfare. It was one of the Central St Martins’ college buildings. No doubt (as this was at least six years ago) there are some present day gallery superstars who share the memory. 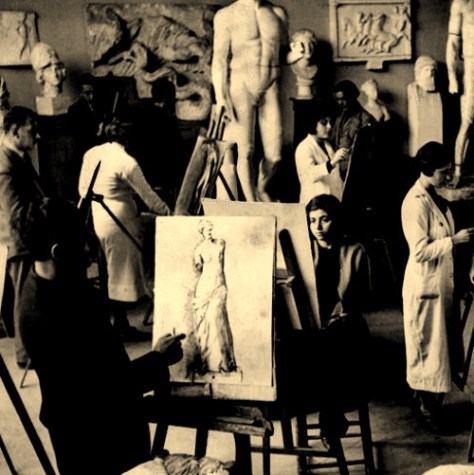