The order in which the Cremaster Cycle films were made.
I have always been impressed with the clearly evident, aesthetic craft of Mathew Barney’s Cremaster Cycle; as each film was finished and still shots started to seep into the art news magazines I was becoming increasingly impatient for a viewing. When I did see the films I wasn’t disappointed. I would not make a direct comparison between the Cremaster films and some of the films of David Lynch – a comparison that is frequently heard – because clearly the targeted audience and ideal viewing environment is so different, however there is one key element that Barney’s shares with Lynch. That is the creator’s clear love of the visual aesthetic for its own ends. Narrative is clearly secondary and much of the meaning contained is personal to the director, even to the extent of being absolutely unfathomable to the viewer. To appreciate this work the audience just has to share the same love of looking; I feel it is as simple as that. In my opinion it is clear from its careful construction (evident whether you like the work or not) that the artist views the medium of film in a similar way that many painters view their medium.
Any narrative is at best buried beneath the layers of fragmented visual metaphor and allegory; apparently even Barney has difficulty fully explaining some of the reasons for the film’s content. I don’t think this is necessarily a weakness or an admission of intentional obscurantism. It is the same process that I identify in my own work once it is completed. So much informs the artist through the working method and practice that minor and frequently apparently insignificant influencing feeds from daily life, incorporated during the process of formulating the work, are frequently forgotten.
Finding not only the visual impact of the films thoroughly stimulating, but the working methodologies clearly similar to my own, I decided to pay a respectful nod to the art of Barney with my own practice. Following on the long tradition of artists referring to other artist’s work I am working from available videos and stills of the Cremaster Cycle and adapting the work of this contemporary art medium into an art medium with more directly personal significance and relevance.
I have worked through the available footage of the films that I have been able to source and followed the sections that repeatedly visually struck me the most. I have then slowly watched and studied them, more or less frame by frame, sketched from the screen captures, and gradually assembled and edited this preparatory material into proposals for a few new paintings.
As I have done this, I have investigated other avenues that the film’s clear references have led to. This has led to ideas and influences in my work that to a viewer may have no direct reference to the Cremaster Cycle but to me are, or were at the time of finding them, directly relevant to my interpretation of Barney’s films.
The first inspiration from Cremaster that led me to the idea of working from them came from a personal consideration that these films seemed almost to be in the tradition of the painted still life: particularly the sixteenth and seventeenth century Northern European still-lives of careful compositional construction, often loaded with symbolic reference and frequently a vehicle for the display of the craft of the artist.
In the past I have been accused of talking both prolix and bollix, so I’ll summarise briefly:
In taking the inspiration for my current work from the analysis of another artist’s work I am doing nothing more radical than artists have done for centuries. I’m happy to acknowledge that this section of Barney’s work is something that has impressed me immensely and I am just acknowledging this formally by working from it in a similar way that I’d work from the inspiration of other art, music, literature, film or performance. 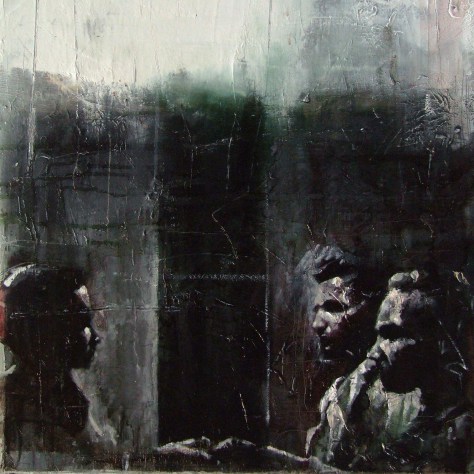