I’m frequently being asked if I my work is stuckist, or neo-modernist, or expressionist or just urban art…
Post-modern irony or post-oddern morony. It’s all cheese as they say…
What is Stuckism? Well it’s certainly not a definitive style of painting. If you consider the origin of the term then it’s basically the opinion of one artist (Tracey Emin), concerning the work of another artist (Billy Childish), that any work not following the methodologies of a few lecturers at a few London colleges, informed by western art developments throughout the latter half of the twentieth century (conceptualism) were irrelevant at a certain time (late 1990s). This proposed insult was first taken as a badge of opposition and then of identity in challenging the mainstream art practice of the late twentieth century.
The group of artists I informally presented together online, under the banner of Neomodernism, was founded in much the same spirit. We, along with the Stuckists and Remodernists, felt that the visual arts were being led by critics, curators and theory. The visual had been replaced by the word, represented by the visual. The value of craft had been replaced by the value of ideas. I was certainly never opposed to all conceptualist installations as I was never an apologist for all and any painting.
Some say that we get the art we deserve; that the excesses of the last flush of the contemporary art market (2007) where increasingly abstract sums of money were being paid for (apparently) increasing un-art-like art objects was symptomatic of the crisis in the western capitalist neo-liberal world.
Perhaps…
Certainly art was not being treated as an object without utility. It was now being used, at this level, primarily as an investment vehicle.
Another label of the current art world (driven primarily by an enthusiastic collector base) that has now been safely absorbed into the mainstream art market is ‘urban’ art. It’s just another ‘ism’ (even though, to my knowledge, it hasn’t turned up yet as ‘Urbanism’) that I’ve been marketed under, despite the fact that a collector described my work as ‘urban’ about fifteen years ago…
It’s a strange name that seems to be waiting for a clear definition as it apparently covers any artist that a growing bundle of galleries want to push. So it stands in for graffiti (indoors and out), street art and performance, paintings that contain references to urban culture, paintings that don’t but are made by artists who have worked on walls, paintings on walls by artists that usually don’t, art interventions against advertising, graffiti being re-imagined on canvas, paste-ups of woodcut prints, mass produced subversive stickers, stencils, tags, tag wars… It’s all very amorphous and perhaps with a long life specifically because of that lack of a clear definition. The one thing that all the work under this umbrella does seem to benefit from is the democratic nature of its audience. It isn’t an exclusive art. It’s not an art that needs the knowledgeable, art-bollox spouting critic to validate it. It has a relevance to an audience that otherwise would have ignored art as being not for them. It’s an art for the modern world.
Things have changed. The distrust in the intrinsic value of postmodern conceptualism is becoming more widespread. Even the critics are starting to challenge their churches a little more freely.
There appears to be a growing return to the appreciation of the value of the small gesture and the quiet moment. There is a growing distrust of league tables of artistic quality being more or less identical to league tables of financial value.
Agents of Stuckism, Neomodernism, Remodernism and a million other artists not slave to the tyranny of the idea of word over art are now able to move forward without the automatic accusations of ‘reactionary’. And it is time to move on. We’ve had our say – so let’s just get on with the work. So I’ll declare my position now. I am no longer a Stuckist or a Neomodernist (I’m not sure I ever identified myself as that anyway). I’m not an Expressionist painter or an Urban Artist. I’m a painter, a visual artist, an artist. I paint for a hundred and one reasons. I paint to the demands of a commissioner, I paint for myself, I paint to make a political point, I paint as personal therapy, I paint to learn about painting, I paint to give away the work and I paint to sell the work, I paint because it’s an obsession and I paint because I’m selfish, I paint to make beautiful things, I paint to make ugly things and I paint for reasons I can’t even explain. 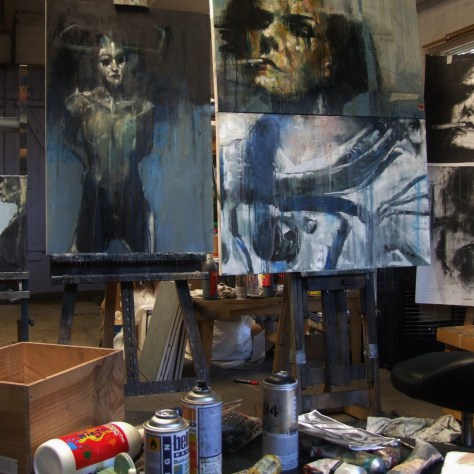 work in the studio