The end is approaching of my four year Dante project; the final part, Paradiso, should have its paintings drying within the next few weeks ready for the October exhibition in London. I’ve often turned to the writing of others for inspiration in my painting. Sometimes it’s clear, as with the Divine Comedy paintings or my occasional references to the poetry of Baudelaire. Sometimes it’ll be as simple as a lost lyric in the middle of song from some distant decade; I won’t be doing it again.
I’ve been working on a piece of my own writing for nearly twenty years. No publisher in their optimistically profitable mind would touch its profligate selfishness and lunacy. It’s very personal and generally autobiographical. But as in the best of all autobiographies it’s generally more fiction than fact. Actually it’s a completely bitter cocktail of lies, justifications, vindicated vendetta and saintly indulgences.
From this point I’ll be working further on the visual interpretation of it through my daily drawing under the ‘Madmen and English Dogs’ tag. The drawings serve as the starting point for proposed paintings and clearly there will always be more drawings than paintings as I’ve already put together about a hundred of them.
For my own records I’ll be keeping the drawings; the Madmen and English Dogs project is as much a personal project as an exhibitive one. I’ll be releasing small print runs of them though.
That’s the plan. Fewer, hopefully stronger, paintings – linked to my writing through my drawings and sharing a common theme of my fucked-up interpretation of what life and art’s about. Not particularly “innovative”, “transgressive” or very likely to “challenge the viewer’s preconceptions” but it will be an honest journey.
The destination will be the same as ever – worms and dirt. I hope it’ll interest a few of you out there, and with the internet technologies to show it off there’s no ticket price to pay. Don’t worry if you don’t like it – there are plenty of other faster, slicker, bigger and more expensive buses out there. 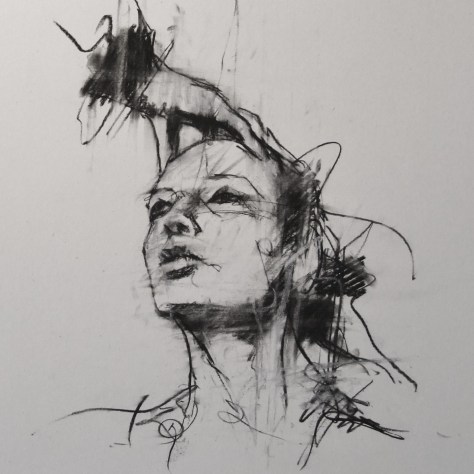 drawing from the “madmen and english dogs” work