There’s been a tiny tea-cup sized storm in the UK art world… When I first read it I must admit that I sat up and started digging around the internet for clarification and any additional information.
The news was that Damien Hirst, doyen of the YBA scene, has publicly stated that personally, he considers conceptual art and abstraction “total dead ends” and that now he will return to “painting my own paintings from start to finish”
Admittedly my initial response was fairly predictable. Something along the lines of… now that Damien’s said it perhaps the critical fraternity might accept it. ‘It’ being, that the excesses of the increasingly insular contemporary installation and conceptualist crowd have become boring. Not just to the general public, who have in the greater number felt intellectually intimidated by work that is intentionally abstruse, but also by an increasing number of artists themselves. Particularly those who were side-lined and ridiculed at college for maintaining that figurative painting, drawing and sculpture were relevant to a modern audience.
Then, after my cynicism had waned a little and I had given some thought to Hirst’s statement, I had to admit to having some admiration for the bloke. I’ve always held that it is more mature, in all respects, be it in politics, religion or any other pursuit where opinions are hard fought for and held, to have it within yourself to admit you were wrong in the past. I’ve said it before on other subjects, but it applies to my beliefs on art too.
I have chosen, after experimenting in various media and ideas, to work figuratively and in the medium of oil paint on canvas. That is because I personally think this medium has a core relationship with my idea of what constitutes ‘art’. A relationship that has been a continual learning experience from the day I first found I had an aptitude for accurately recording what I saw before me with a pencil on paper. And I have never stopped learning and I base my opinion on that learning. But I know it’s important to realise that I don’t know everything. So I think I’m right. But I might be wrong. Well done Damien. 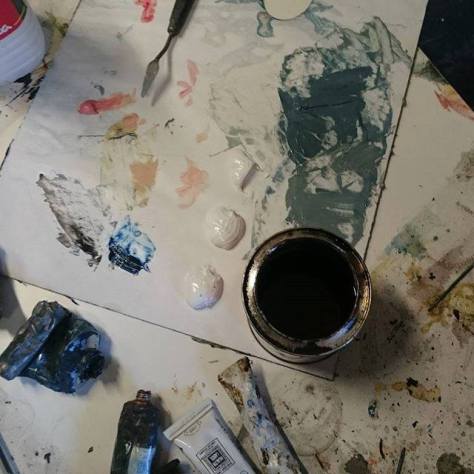